Automatic Storage Management (ASM)
Architecture
redundancy
ACFS | CloudFS
What can DBA.nl do for you?

ASM was introduced by Oracle in 2007 with the release of Oracle 10gR1. Until then, you were expected to use OCFS (Oracle Cluster File System) as a cluster file system in, for example, a RAC Cluster.

Since OCFS is basically a file system like any other, this means that setting up and managing OCFS volumes for the purpose of storing database files, for example, is primarily the task of the system administrator. This changed with the introduction of ASM. ASM is primarily a database file system and a (Cluster) Volume Manager. One of the main goals of ASM is to simplify the management of data files, control files, redolog files, archive logs and even RMAN backups. With the introduction of ASM, it became possible for DBAs to manage volumes and file systems themselves, without being dependent on system administrators, using SQL. In this first release, ASM was part of the RDBMS Server Software. In order to realize the desired separation, for example the application of patches, between the Oracle_Home (OH) of ASM and the databases, a separate OH had to be created purely for ASM. In a RAC environment this meant that at least 3 OHs were present on each Cluster node. 1 OH for the Oracle Clusterware, 1 RDBMS OH for ASM and at least 1 RDBMS OH for the databases. Since Oracle 11gR2, ASM has been part of Grid-Infrastructure (GI) Software (the successor to Clusterware). GI can be installed as a Cluster or as a Standalone installation.

Oracle ASM is not a database, but an instance of type ASM. Like database instances, an ASM instance consists of allocated memory and background processes. ASM uses disk groups for the storage of database files and since 11gR2 also for the storage of Cluster related files such as Votingdisks and the ClusterRegistry. A disk group consists of 1 or more disks that are treated as 1 by ASM. ASM distributes database files such as data files in extent. Extents are evenly distributed by ASM (balanced and automatic data distribution) over the disks that are part of the disk group in which the database files are stored. A database that uses ASM for the storage of 1 or more files gets direct access to the disks. The ASM instance itself is not part of the I/O operations, which means that ASM offers Raw Disk performance.

See the representation of the ASM Storage components below. 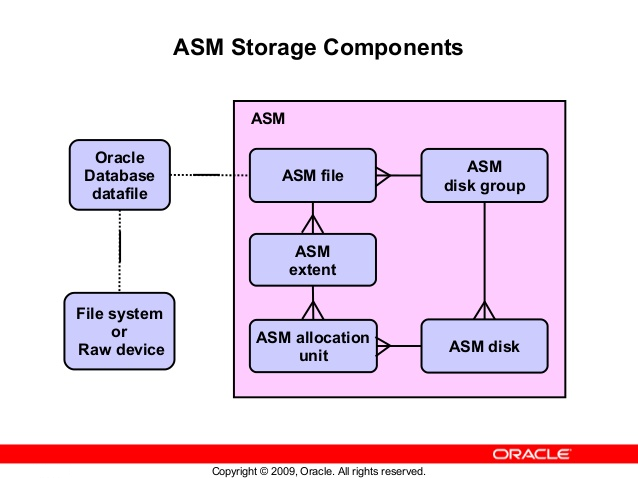 As mentioned in the introduction, ASM simplifies the management of database files. Unlike a regular file system, when creating database files, only the name of the ASM disk group needs to be specified. Default disk groups for, for example, data files or redologs can be defined in any database instance that does not even require the name of the disk group to be given. For example adding a datafile to a tablespace can be done with the following command:

Or in case the parameter db_create_file_dest is defined, it suffices with:

ASM uses OMF (Oracle Managed Files) for the storage of database files, for which a set of templates are defined within ASM. If desired, custom templates can be defined.

In addition to supporting Array-Based (External) Redundancy, ASM also offers the possibility to apply Redundancy at the disk group level. This Host-Based Redudancy can be divided into:

When using Redundancy from ASM, Fail-Groups are used. Specific Fail-Groups can be defined when creating a disk group. This can be useful, for example, in the case where there are two or more storage locations where it is desirable to group the offered disks per location. 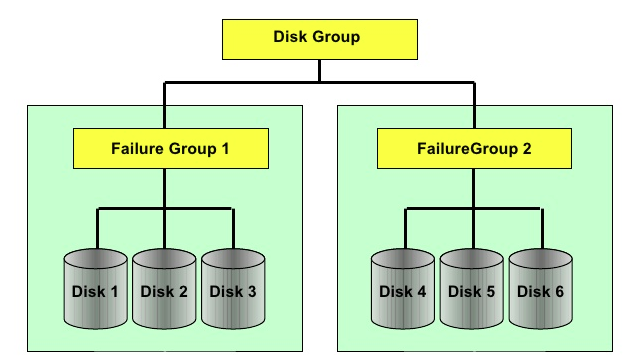 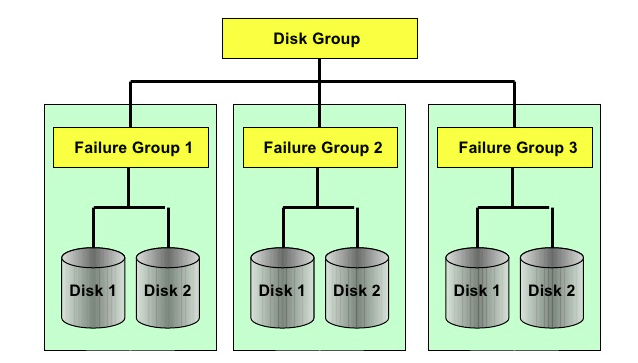 For example, the power of rebalancing can be used very well in SAN migrations. By offering disks from a new SAN to the ASM instance, it becomes possible to migrate all blocks online from the existing SAN to the new storage.

While ASM was primarily developed as a database file system, Oracle developed ACFS (introduced in 2007 with the release of 11gR1) with the aim of extending the functionality of ASM to a general-purpose file system

ACFS stands for Oracle Automatic Storage Management Cluster File System and is actually an add-on on top of ASM that makes it possible to use all the advantages that ASM offers and to offer a multifunctional file system on it. An ASM Cluster File System is created in an Automatic Storage Management Dynamic Volume (AMDV) which in turn is created in an ASM disk group. Which means that all the benefits that ASM offers can be used on a multifunctional Cluster file system. A common application of ACFS is for the storage of RMAN files by providing a “readable” file system that can be backed up by a standard file system agent on the backup solution.

For example, ACFS is used as standard in Engineered Systems from Oracle such as the Oracle Database Appliance (ODA) for, among other things, the storage of all database related files.

CloudFS was introduced in Oracle11gR2 patch set 11.2.0.2.0 and is a new license form for ACFS including the Advanced Data Services ACFS provides including:

CloudFS (ACFS) is still free to use when used for the storage of Oracle database files, Oracle Application binaries, Oracle Homes and Oracle software administrative and diagnostics files, except that the above mentioned services such as snapshots and replication.

What can DBA.nl do for you?

Since the introduction of ASM in 2007, DBA.nl has earned its stripes with the implementation and management of ASM environments ranging from small standalone environments to complex, geographically separated environments with various redundancy levels.

If you would like advice or assistance with the implementation and/or management of ASM, please contact our sales department on telephone number 088 055 55 50