Oracle has an extensive portfolio of software products and, like all software, Oracle’s product line contains vulnerabilities from time to time. Patches are regularly released to fix these.

For the RDBMS Server (database) Software, there are two types of Patches: 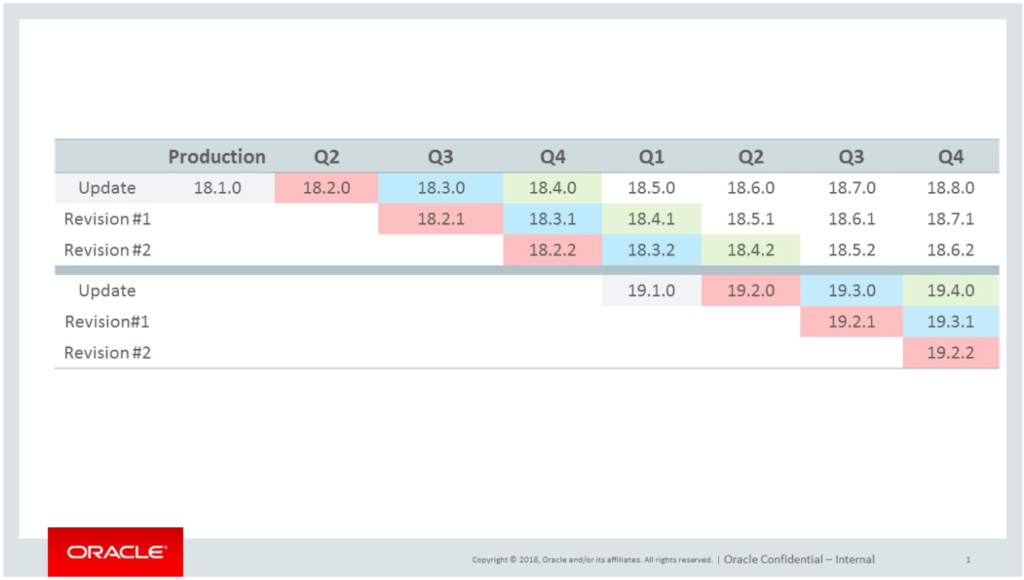 The different proactive patch methodologies can be visualized as follows:

Oracle uses the following terminology with regard to the proactive patches:

These are cumulative patches in which all previous SPU patches have been merged with some other important fixes. These patches result in a minor version change, for example 11.2.0.1.1 to 11.2.0.1.2.

SPU patches are released quarterly and only contain security fixes. These SPU patches are only available for Linux based operating systems; for Windows the so-called Bundle Patches (see below) are released. SPUs are cumulative, but a certain patch level must be present to apply. SPU patches are the patches that used to be called CPU patches.

BPs can be seen as a PSU.
(English)

For databases (no GI), Oracle releases patches for the JVM component.
(English)

In contrast to a “normal” Bundle Patch (BP), an ODA BP contains patches for the OS and hardware in addition to patches for GI and RDBMS.
(English)

What can/should I do with it?

Every quarter, on the Tuesday closest to the 17th of January, April, July, and October, Oracle releases a Critical Patch Update (CPU). Depending on the version and platform, these Security Fixes are processed in the different Proactive Patches (RU/RUS/SPU/PSU/BP/PBBP). Depending on the vulnerabilities that have been patched and their severity, it must be applied to the various Oracle components that are affected. The Thursday before the CPU is actually released, Oracle will release a Pre-Release Advisor. It contains all necessary information regarding the CPU. Depending on that information, it must be decided whether it is necessary or useful to install the CPU. Customers who would like to receive information about the CPU can register here: http://www.oracle.com/technetwork/topics/security/securityemail-090378.html Customers who have products that are still in Premium Support (more information about the different support levels at https://www.dba.nl/oracle-database-12-2-en-slanging-steun-11-2-mar-6-2017/ ) when they log in to support.oracle.com, they receive a message regarding the SPU .

Which Proactive Patch should we apply?

Applying the Database Security Patch Update (SPU) is still available for Oracle 12.1 and is still considered a valid patch methodology. In terms of application, this method has the lowest risk and requires the least in terms of testing. For Oracle 12.2 databases this is not an option as no more SPUs are released for this version. With regard to Oracle 12 databases, Oracle’s advice is as follows:

The DBBP is a PSU Superset, which means that it also contains functional changes in addition to Security and Critical Fixes. As more changes are made, more testing is required. In contrast to the PSU, after applying the DBBP, the applications will also have to be tested.

The table below is from the MOS Document “Overview of Database Patch Delivery Methods (Doc ID 1962125.1)” in which the different patch methods are described:

With regard to the different Patches, the different Patch methods (BP, PSU or SPU) cannot be mixed in the same ORACLE_HOME (OH). When a DBBP has been applied to a particular OH it is not possible to apply a PSU to this OH later on. Unless the DBBP are rolled back. Visa vice versa is the same. It is therefore important to determine in advance which method to use. DBA.nl recommends using PSUs for Linux environments and BPs for Windows.

What does DBA.nl recommend for applying updates?

We recommend applying an SPU, PSU or Bundle Patch to a representative test environment as soon as possible after it is released. This allows you to rate:

What is the DBA.nl Security Patch service?

The standard DBA.nl SLA does not include proactive patching because many choose to do this themselves. As an additional service, we can take this work off your hands.